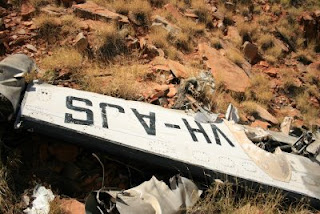 So i lost my handheld camera.. somehow. Im not sure how it happened, but it did. So i have been forced to learn how to use my SLR. Not a bad thing, but also not that convenient to carry.
However, back to the title of the post. This is the rego of a Westwind aircraft, operated by Pel-Air, that crashed on approach into Alice Springs back in 1995. This is the ATSB report for the crash for anyone interested.
http://http//www.atsb.gov.au/publications/investigation_reports/1995/AAIR/pdf/aair199501246_001.pdf
I wont go into much detail with it, but it was definately something, although a tad morbid, i enjoyed researching and seeing the wreckage. They were doing a NDB/Locator approach, which used 3 different navaids, which was at the time unique to Alice Springs airport. There were a whole list of things that went wrong, however the crux of the crash was that the FO set the minimums of the approach to 2,300 feet, rather than the 3,100 required for CAT C aeroplanes. However, the captain agreed with the minimums that the FO set. They also had excessive decent rates after the final approach fix. And finally decended to the circling minima before being within the circling area, and being well below the MDA. When you see the crash site, its sad to know that if they had been around 20ft higher, they would not have collided. 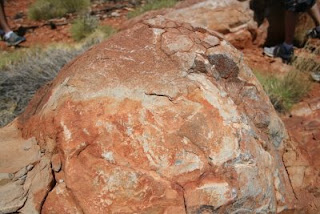 This is a photo of the rock where they first collided. You can see aluminium scratch marks on the rock and then the trail of destruction begins. This is on the Northern Side of the Ilparpa range. 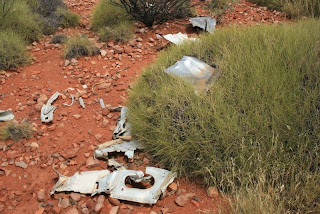 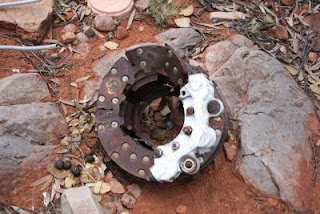 Some wreckage which you can follow along the trail. I have taken various shots of aircraft pieces. We found everything from the DME, to some of the cargo that was on board. Apparently when it crashed it was carrying a fair bit of money and it was said to have scattered money all over the ranges. 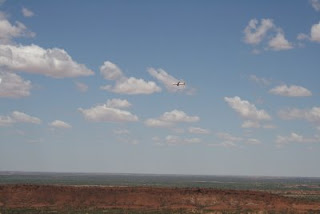 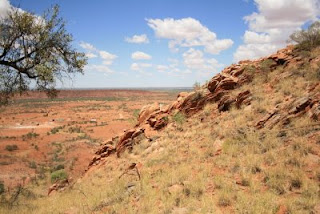 This photo shows you the southern side of the Ilparpa range. You can see a tiger A320 coming into land on rwy 12. The Ilparpa is on the Southern side to the Macdonnell ranges. 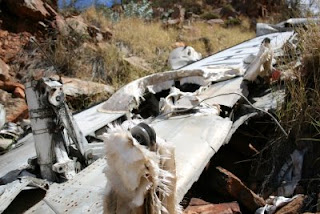 This is part of the main wheel and wing assembly. This is located in a small valley down the southern side of the range. 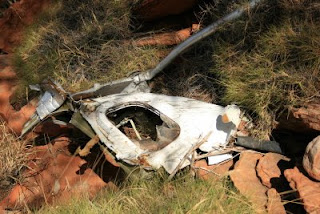 This is a piece of the fuselage. Hard to tell if its part of the cockpit section or the side, but you can see how devastating the impact was. We found one of the cockpit seats and it was almost unrecognisable as a seat.